We have teamed up with Barclays to offer the chance to win a pair of tickets to the Barclays ATP World Tour Finals at The O2 in November. This incredible sporting occasion is the final tournament in the ATP calendar and features the top eight men’s singles and doubles players in the world, including Novak Djokovic, Roger Federer and Stan Wawrinka.

We have 75 pairs of tickets, five across each session of the event from Sunday 9 November to Sunday 16 November, which includes the chance to attend the semi-finals and the final. Winners, chosen at random, will receive a pair of tickets to a session, from the 15 available, that is also chosen at random.

This year Barclays are saying thank you to those who represent the true spirit of the game, just like the 2014 Barclays Ball Kids squad who will be taking to the court at The O2 alongside their tennis heroes and demonstrating their skills of endurance, co-ordination, balance, speed, ball-skills, teamwork and leadership. theguardian.com 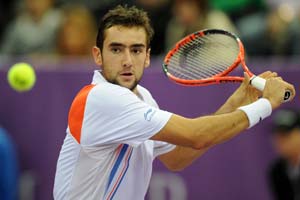 The Croat will make his debut at the year-end event as he joins Novak Djokovic, Rafael Nadal, Roger Federer and Stan Wawrinka in the elite eight-man field at the prestigious tournament, to be held at The O2 in London from 9-16 November.

The 26-year-old Cilic will be the first Croatian to play at the season finale since Ivan Ljubicic qualified for the 2006 Tennis Masters Cup in Shanghai. The right-hander, who is through to the semi-finals in Moscow, has compiled a career-best campaign in 2014.

Coached by 2001 Wimbledon champion Goran Ivanisevic (who qualified for the year-end event five times in his career), Cilic won his maiden Grand Slam championship at the US Open, toppling Federer in the semi-finals before beating Kei Nishikori in the final.

He also lifted the trophies at ATP World Tour events in Zagreb and Delray Beach and finished runner-up in Rotterdam. See more…

The eight-player singles field for the 2014 Barclays ATP World Tour Finals is set. Japan’s Kei Nishikori makes history by becoming the first Asian player to qualify for the season finale in singles after he beat David Ferrer in the BNP Paribas Masters quarter-finals today.

As a result of Nishikori’s victory, Milos Raonic, who earlier beat Roger Federer in the Paris quarter-finals, also qualified for the first time.

Raonic is the first Canadian player to qualify for the season finale in singles.

Spain’s Rafael Nadal also qualified, but was forced to withdraw as he will undergo appendix surgery next week.

Nishikori broke into the Top 10 of the Emirates ATP Rankings for the first time on 12 May, becoming the first Asian player to rank among the elite since Thailand’s Paradorn Srichaphan on 29 March 2004.

Coached by Michael Chang, who qualified for the season finale on seven occasions in his career, Nishikori beat three Top 10 players — Raonic, Wawrinka and Djokovic — en route to becoming the first Asian man to contest a Grand Slam championship final at the US Open (l. to Cilic).

Raonic has become the first player born in the 1990s to qualify for the Barclays ATP World Tour Finals. The 23-year-old Raonic, who has reached 13 tour-level quarter-finals (or better) in a career-best season, lifted one title at the Citi Open in Washington, where be beat Vasek Pospisil in the first all-Canadian final in the Open Era. He also finished runner-up to Nishikori at the Rakuten Japan Open Tennis Championships (Tokyo) and reached two ATP World Tour Masters 1000 semi-finals at the Internazionali BNL d’Italia in Rome (l. to Djokovic) and the Western & Southern Open in Cincinnati (l. to Federer).

He reached his first Grand Slam semi-final at Wimbledon (l. to Federer). This year, Raonic has struck more than 1,000 aces in a season for the second time (also 2012).

The Bryans have already clinched the year-end No 1 Emirates ATP Doubles Team Ranking for a record 10th time. The Barclays ATP World Tour Finals has welcomed more than 1.25 million fans to The O2 arena over the past five years, establishing itself as the biggest indoor tennis tournament in the world since moving to London in 2009. Read more…