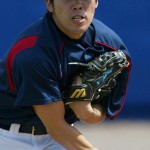 Japanese right-hander Kazuhito Tadano is no stranger to eephus pitches. But this might be his most epic attempt yet.

On Monday, with his Hokkaido Nippon-Ham Fighters facing the Hanshin Tigers, Tadano tossed a most extreme arcing pitch toward batter Mauro Gomez. It landed safely in the catcher’s hands, having gone right...Read More »

All eyes on Lexington Times for championship at Lingfield Park

With just a few days to go now until the All-Weather Three-Year-Old Mile at Lingfield Park, a total of 13 horses and their trainers are eyeing the coveted £150,000 prize.

The race will take place at the Surrey-based course from 3pm on Good Friday, and sees one of the most exciting...Read More »

Can Ireland repeat their Six Nations success at the Rugby World Cup?

With just five months to go until the Rugby World Cup, which kicks off in Great Britain on 18th September, national rugby teams around the world are doing their utmost to make sure they walk away victorious in October.

Rugby fever is in the air as we kiss goodbye to the...Read More »

Wall Street Looks at the Djoker

Novak Djokovic’s story is one everyone should adore—and at last, after years of toiling behind Roger Federer and Rafael Nadal , Djokovic is beginning to feel the love. He will never be Federer, the Michelangelo of tennis for aficionados, a player whose grace and prodigious talent have made him perhaps...Read More »

England won this year’s Six Nations before travelling to Australia and beating the Wallabies 3-0. They conceded 10 tries in the series, however, and Jones demanded defensive improvement.

“If you take it personally, then it’s your ego and the game isn’t...Read More »

Where to Buy Conference Basketball Tickets 2017